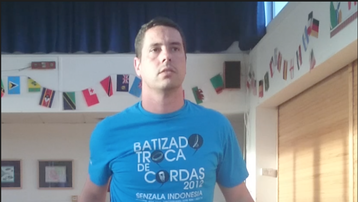 Mestre Pedro started training capoeira at the age of 7 even though from the age of four he was brought along by his dad, Mestre Gato to capoeira events.
Arrived in the UK 16th of May 2000. He was based in Edinburgh for 6 years and he also regularly taught in Glasgow, Stirling and Dundee.
Moved to Cambridge 2006 and today he supervises capoeira schools in many UK cities (Glasgow, Edinburgh, Dundee, Northampton, Sheffield, Grantham Cambridge, Leicester and
Wrexham) and helped his students to establish schools in the Basque country, Barcelona, Iran, Indonesia and China. In Indonesia there are schools based in 7 cities and over 300 students.
He was awarded the level of Mestre (Master) in July 2011 by Group Senzala one of the oldest Capoeira Groups in the World.
He has worked in Partnership with Capoeira 4 Refugees, a British UK Charity that uses Capoeira as a tool to help children heal the wounds of war, violence and forced displacement in the Middle
East with trips to Palestine and Jordan in 2015.
"Capoeira is such a part of my life, I cannot remember when I saw it the first time. I was born into it.  I started training by the age of 7 but way before that I was around it, surrounded by it. My father is a great Capoeira enthusiast. Back in the 60ies he with friends founded the group that would become the iconic Grupo Senzala. This group was a part of my family growing up.

Somehow my photo became art on a building off Brick Lane.
I trained initially 2 times a week. By 16 I started traveling with my father to other events and the relationship with capoeira grew stronger. I started training more regularly.
Capoeira is so many things for me that it's quite hard to describe it. However one thing that I realized very early on was that Capoeira could open many doors to places and people I would not come across otherwise. It helped me get to know parts of Rio where many would not dare to go. It allowed me later on to travel abroad and make a living out of it, something that had never crossed my mind.
I came over to the UK sixteen years ago. All I had was a ticket, 20 pounds and 30 dollars in my wallet, plus some 18 berimbaus I made it myself and the will to give it a good shot at it. Since then I slowly built up my work, made many friends traveled the world doing what I love. Everything I have I owe to Capoeira, my mestre, my family, my teachers, instructors and students.
Here is the link to my blog Read more
I teach regularly in Cambridge, Grantham and Northampton. I am also available for private classes, shows and workshops."