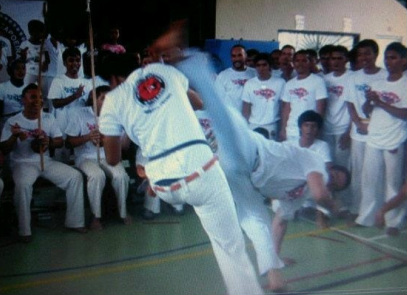 Can be described as a Brazilian Art form that brings together elements of martial arts, acrobatics, dance and music in a game. But I prefer a description of a famous capoeira master and poet: “Capoeira is a game. It’s toy. It’s to respect fear and to weigh well your courage… Capoeira is a smile from a little kid, a flight of a tiny bird and a leap of a coral snake. It’s to feel in your mouth, all the taste of danger, it’s to smile at your enemy and to shake his hand… It’s to get up from a sweep before you even touch the ground, Capoeira is a tiny little boat free on the sea waves…”

Capoeira is a by-product of a culture of resistance of an enslaved people in the past. An Art form that, despite being illegal and prosecuted after abolition until well up to the middle of the twentieth century, with virtually no outside help, has not just spread through out Brazil but the entire world. It has overcome the national prejudice that all non European folklore manifestations suffered in the past to become Brazil’s biggest cultural export with thousands of foreign students visiting the country every year in order to learn and improve their knowledge of the art. It’s taught in most learning centres in Brazil from Universities to Kindergartens. It is used as a tool to rehabilitate and support poor kids in Rio de Janeiro, to heal children affected by war and conflict in the Middle East, and in social programs through out the world.

Capoeira has an undeniable link to Brazil and It’s history, starting from the colonization period when slavery was the backbone of the then colony’s economy, up to our present day. Capoeira’s history is full of mystery, myths and legends. There is not a creator or an exact year when it started. This gives room for many theories about its beginning and claims about its true nature. This is reflected in the plurality of Capoeira we see today and even among the main recognised styles of Angola and Regional. Attempts were made more recently to organize the art form through federations. Some of those tried to enforce regulations and create standards from the top downwards. But due to capoeira’s intrinsic nature all those who followed this path have not succeeded. Capoeiristas cannot even agree on where it comes from, although most concede that the capoeira as we know today has a direct link to the area of the Recôncavo Baiano, the area around the shores of Baía de Todos os Santos (All Saints Bay) in Bahia, Brazil. Other Capoeiras emerged in the states of Rio de Janeiro and Pernambuco but those did not survive as it was practiced as a rough street fight without the socio cultural aspect that the Capoeira of Bahia evolved to become. 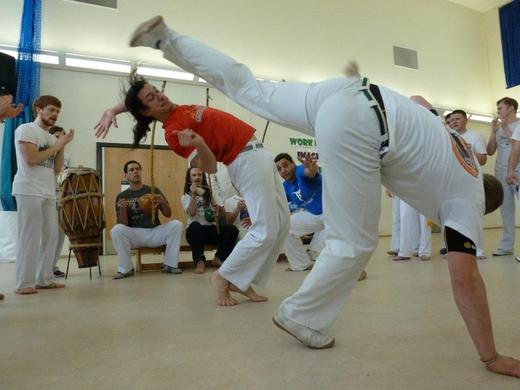 It is my belief that the diversity of Capoeira and it’s ability to transform and reinvent itself is what has kept it alive and free and also is what has allowed it to grow. Standards and regulations that go against this very nature of Capoeira are destined to be divisive and to failure.

It’s the passion for Capoeira uniqueness and all its transformation power that fuels Group Senzala to keep doing what it has done for the last fifty years: Promote Capoeira and its research, enrich peoples life, respect its diversity and to alleviate and fight against what essentially has made Capoeira come about: exploitation, exclusion and slavery in all present day’s shapes and forms.

Capoeira is a ritualistic game played in a circle of people, the Roda, where the berimbau (main instrument) leads the capoeira orchestra and sets the pace of the game. The game is based on a unrehearsed combination of attack and defense movements spiced with acrobatic tricks where the aim is get the other either through kicks or sweeps or take downs. The paradox of the game is that although it needs a certain cooperation of both players, it is also a dispute where both players transform their dialog of movements into something unique and new that neither is certain of its outcome every time they play. The game has no winners or losers. Songs tell stories, the chorus and rhythmic claps amplifies the hit from the music that engages all members together creating an amazing energy, the Axé, of the Roda.  Capoeira brings us back to our primitive origins long forgotten by our society where every single individual in the circle can equally influence the outcome and each other not with words but actions.